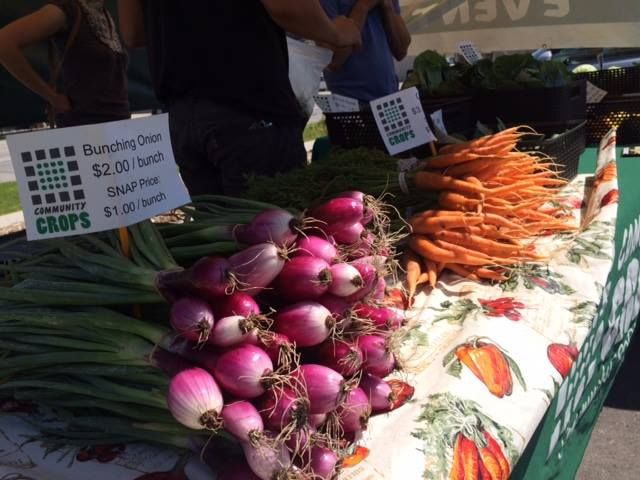 After a long day’s work, Lamya Ali pulls into the parking lot of the Health 360 clinic on her way home. Accompanied by her client—and friend— whose English is steadily improving, Lamya browses a selection of fresh produce. On this particular trip, it’s garlic for her friend and his wife, and cucumbers and bell peppers for herself. The man and his wife are refugees. They often marvel at how much $5 can buy at this mobile farmer’s market on ‘O’. It’s summer days like these that make Lamya thankful for the Veggie Van.

Started by the Community Crops in 2015, the Veggie Van has become a reason some Lincolnites look forward to the summer months. The mission of this van is simple: get healthy food into the hands of community members for whom fresh, local produce is out of reach.

“We want people going to that clinic to step out and buy produce,” said McShane-Jewell in an earlier interview with the Lincoln Journal Star.

Lamya Ali is an on-call translator fluent in Arabic and Urdu. Her job is to make doctor appointments, DMV visits and other similar errands go smoothly for refugees and immigrants. She said projects like the Veggie Van fulfill a need that translators often hear about.

“Many low-income new refugees are attending English classes and living with government assistance and always want to get something healthy,” said Lamya.

She notes that the affordable prices on locally sourced food help many adjust to American life.

The van reminds them of the markets back home.

“I was living Iran and Pakistan for a while. Farmers back in these countries pick their veggies in the early morning and bring them to the market by eight or nine o’clock in small stalls shops,” said Lamya, an Iraq native. “There are no chemicals on them like they have in the supermarkets.”

Efficiency is the goal for the 2017 season. Community Crops has been using feedback they’ve received from the community to plant more of last year’s most sought-after produce.

For people like Lamya, it’s not just the idea of the Veggie Van that is special. It’s the people running the van that are part of the experience. “They’re just great,” she said. “Everyone there is very friendly, very patient, and of course, so helpful.”